The Dittons Skiff and Punting Club was formed on the 24th October 1923 at a meeting held in Long Ditton Parish Hall. The initial club premises were at Hammerton’s boathouse in Ferry Road.

At a committee meeting on 10th December 1923, it was agreed to hold a scratch regatta on Boxing Day, a fixture that continues to the present day. Competition on the river was serious with local regattas held at various points on the river. The local regattas were Hampton Court and Dittons, Kingston Borough and Teddington Reach.

Hampton Court and Dittons regatta was established in 1888 and continued until the Second World War. The regatta was held on the Middlesex bank with an enclosure and tentage. The start was opposite the club’s present location, to the finish opposite Hammerton’s.

In 1946, on the recommendation of Tiny Knight the then club captain, the Club purchased a four sculling skiff from Hobbs in Henley for £36, as it was thought such a craft would be useful for training novices.

In 1948, a fire destroyed most of the club’s boats and saw Hammerton’s move into bankruptcy. This resulted in Dittons renting the whole of the premises. Luckily the four sculler was stored outside and survived the fire!

The fire meant that new boats must be obtained, which required a substantial sum of money. A general fund was established and in order to boost this, Sandy Powell was asked to put on a show. As it was approaching Christmas, the show became the pantomime Aladdin. It was a great success and ‘Sandy’s Show’ became a regular fixture for the next decade and 3 new singles arrived in 1953 from Eton College Boathouse for £110 each.

Tiny Knight, who joined the club in its early days, was an influential member of Dittons along with his wife Nancy. A memorial to Tiny Knight was made in 1952 in the form of the purchase of the Rose Bowl, which was awarded following the initiation of the race from Hampton Court to the Skiff club. The long distance race was to represent Tiny Knight’s stature, both physically and in the sport. It was decreed that the race was restricted to scullers who had not won a senior event in skiffs. This race has continued since 1953 to present day. 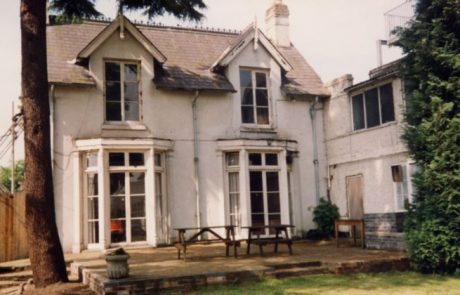 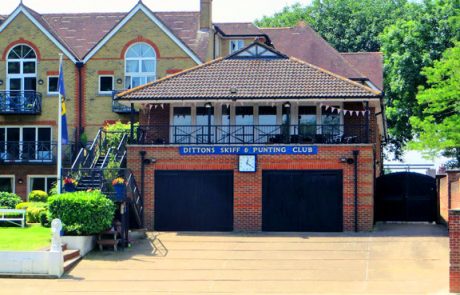 In 1958, Ray Pembery was elected Captain. In 1954 he had married Tiny Knight’s daughter, Pat. Ray initiated a ‘Captain’s Letter’ to keep all members informed of current events.

In 1962 Dittons received official notice to leave the premises and thus the search was on to find new premises. Surrey County Council and Esher Urban District Council jointly owned the premises known as the Albany site, which they used as storage for school equipment. This had earlier been the Vaudeville River Club frequented by artists from the music halls.

Attached to this site was a large house with grounds running down to the river. Whilst not perfect, Dittons were grateful to have somewhere to operate from. Considerable work went into making the premises usable; installing a bar, the lawn and a boatshed made from an old hut used to accommodate ATS girls. Compensation due to the move was used to purchase 2 new double skiffs from Radley’s in Clapton.

At Ditton’s 1978 AGM, Pat Pembery was elected as the first lady Captain of the Club, with David Gattey as her Vice-Captain. From here, a firmer control on the composition and entries of crews was established. Also, a meeting of active members on Saturday afternoons was started, with tea being provided by Bun Harvey, which has now evolved into today’s weekly Bridge-to-Bridge event. 1978 saw Dittons winning the Ormiston trophy for the first time.

In 1992 the Chancellor of the Exchequer, Norman Lamont, relaxed the rules over the sale of Council property which meant it became very advantageous for Elmbridge to sell any assets before the end of 1993 – Dittons was on the move again!.

Fortunately, the preparation work done by Mike Phillips and Simon Leifer with Elmbridge and the proposed developers Carla Homes meant that the Special AGM held August 1993 passed the resolution authorising the Development Sub-committee to progress the redevelopment of the new site without question.

Dittons moved out of the derelict Albany Cottage in November 1993 into an empty warehouse adjacent to The Albany pub car park whilst the builders moved in.

Dittons moved into the splendid new clubhouse in November 1994 with the official opening by the Mayor of Elmbridge being held in March of 1995, Dittons now has possession of the building securing the future of the club for years to come.

2012 was a memorable year in which DSPC took part in both of the great ceremonial events on the Thames.

DSPC had 12 boats taking part in this unique event. It was a busy and eventful weekend with everyone playing their role in getting boats down to Chiswick on the Saturday, where Ditton’s crews were assisted by the army in lifting our boats out at the Chiswick boat houses.

Early Sunday morning, the Ditton’s crews departed in high spirits for Chiswick where they had time to finish decorating their boats and making final preparations for the pageant, including final positioning of our specially commissioned Dittons flags.

Once Dittons crews were boated they rowed down past Barnes and Putney, receiving loud and continuous support from the moored cruisers and other crews waiting to take part in the pageant. Lunch was taken in the boats at Wandsworth Bridge, where all the Manpowered Squadron mustered in preparation for the off.

The Queen’s Row Barge ‘Gloriana’ set off followed by the 300 boats of the Manpowered Squadron to rousing cheers from the 1000’s watching from the riverbank.

Ditton’s crews had practiced rowing in formation and rowed down for the formal salute “Toss oars!” to HM Queen and the Royal party aboard ‘The Spirit of Chartwell’ moored at Chelsea. The squadron continued rowing or paddling their boats down steam to Tower Bridge, now followed by the largest flotilla of boats that had been seen on the Thames in centuries.

It was a great experience to see the huge number of boats on the river and the vast crowds cheering on the crews in a deafening and continuing wall of sound. Yes, it did rain, and yes, crews were cold at the end, but regardless, it was a fabulous day which all of Dittons was proud to have taken part in.

Three weeks later on the 27th July was the last day of The Olympic Torch Relay which culminated that evening with Olympics Opening Ceremony. This was a great event which once again involved both skiffs and punts from Dittons in the first of the three flotillas which accompanied The Queen’s Row Barge ‘Gloriana’ carrying the Olympic flame.

Dittons crews mustered with the other traditional boats at Hampton Court Bridge to get the best view of the torch being carried onto ‘Gloriana’ by a dancing Sir Matthew Pinsent. We then set off with ‘Gloriana’ receiving a huge cheer as the flotilla passed the Dittons clubhouse. A well- earned break was taken at Teddington Lock before the final stretch to Richmond, where the crews were rewarded with well-earned bacon sandwiches and cups of tea in the rain! ‘Gloriana’ continued on downstream to eventually pass the Olympic flame on to David Beckham to take to the Olympic Stadium for the ‘Greatest show on earth’.

It was a fabulous event made all the more special by the huge numbers of cheering crowds along our usually quiet stretch of the river.

A booklet containing a full and excellent history of the club is available to members. Also have a look at the photos and certificates on the walls of the clubhouse as well as the names of the boats, as some are named after well-loved and valued supporters of DSPC.

Many thanks to all those who organised and took part in these memorable events.

The Clubs’ now President Malcolm Knight played a major role in creating, planning and organisation of both of these memorable events